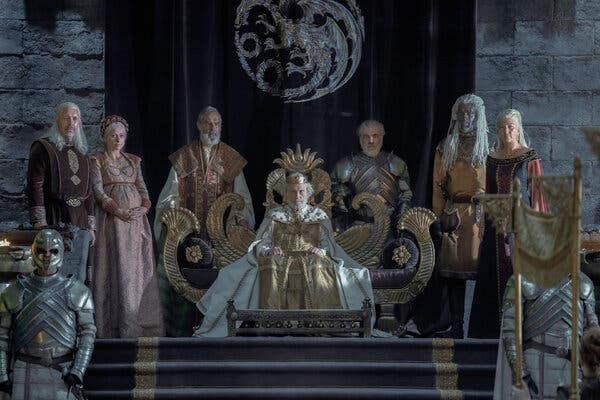 The network said viewership for the “Game of Thrones” spinoff was the biggest start for a series in its history.

The Sunday night premiere of “House of the Dragon,” the much-anticipated “Game of Thrones” spinoff, was the most-watched episode of an HBO series since … “Game of Thrones,” the cable network said on Monday.

HBO said 10 million viewers had watched the episode across its platforms, including the cable network and its streaming service, HBO Max. Cable-only viewership totals, which are supplied by Nielsen, will not be made public until Tuesday morning.

The viewership was the biggest start for a series in HBO history, the network said. A strong debut from “House of the Dragon” is a source of comfort to HBO executives, and may be evidence that viewers are craving more stories from Westeros. HBO has at least five other “Thrones” spinoff ideas in development.

Casey Bloys, the chief content officer of HBO, said in a statement that he was “ecstatic with viewers’ positive response.”

The last time “Game of Thrones” aired, in May 2019, the series shattered viewership records but also suffered from a last-season backlash from critics and fans. Some people associated with the show — including the writer who created the “Thrones” universe, George R.R. Martin — were concerned that the backlash would turn off viewers from giving “House of the Dragon” a chance. The prequel takes place some 200 years before the events of the original series.

“House of the Dragon,” which benefited from a lavish marketing campaign, has nine more episodes this season. HBO executives will carefully monitor if some viewers sample the series and move on to something else. In early September, Amazon will premiere its own splashy fantasy series, “The Lord of the Rings: The Rings of Power.”

“I think the show will do really well,” Mr. Bloys said in an interview last month. “But it will have to do the work on its own to bring people in and to sustain the viewership.”

The numbers for “House of the Dragon” were significantly higher than they were for the finale of “Euphoria,” the series that HBO said was its most-watched show since “Game of Thrones.” The “Euphoria” finale scored 6.6 million viewers in February, and the second season averaged more than 16 million, HBO said.

The “House of the Dragon” total also dwarfed the third-season finale of HBO’s “Succession,” which led all series in Emmy nominations this year. That episode, which aired in December, averaged 1.7 million viewers, a record for “Succession,” the network said.

John Koblin covers the television industry. He is the co-author of “It’s Not TV: The Spectacular Rise, Revolution, and Future of HBO.” @koblin